Our community events connect you directly with the people, places, stories that bring the Vermont experience to life. Check back often as we’re always adding new events to the list.

We’re always looking for volunteers to lend a hand, either at community events around the state or here at the station! Interested? Contact Amy Zielinski: azielinski@vermontpbs.org | (802) 540-6882. Be sure to also sign up for our newsletter.

For official Vermont PBS meetings, such as Board of Directors, please visit vermontpbs.org/meetings

More coming soon! Sign up for our newsletter in the mean time to stay connected and learn of future events. 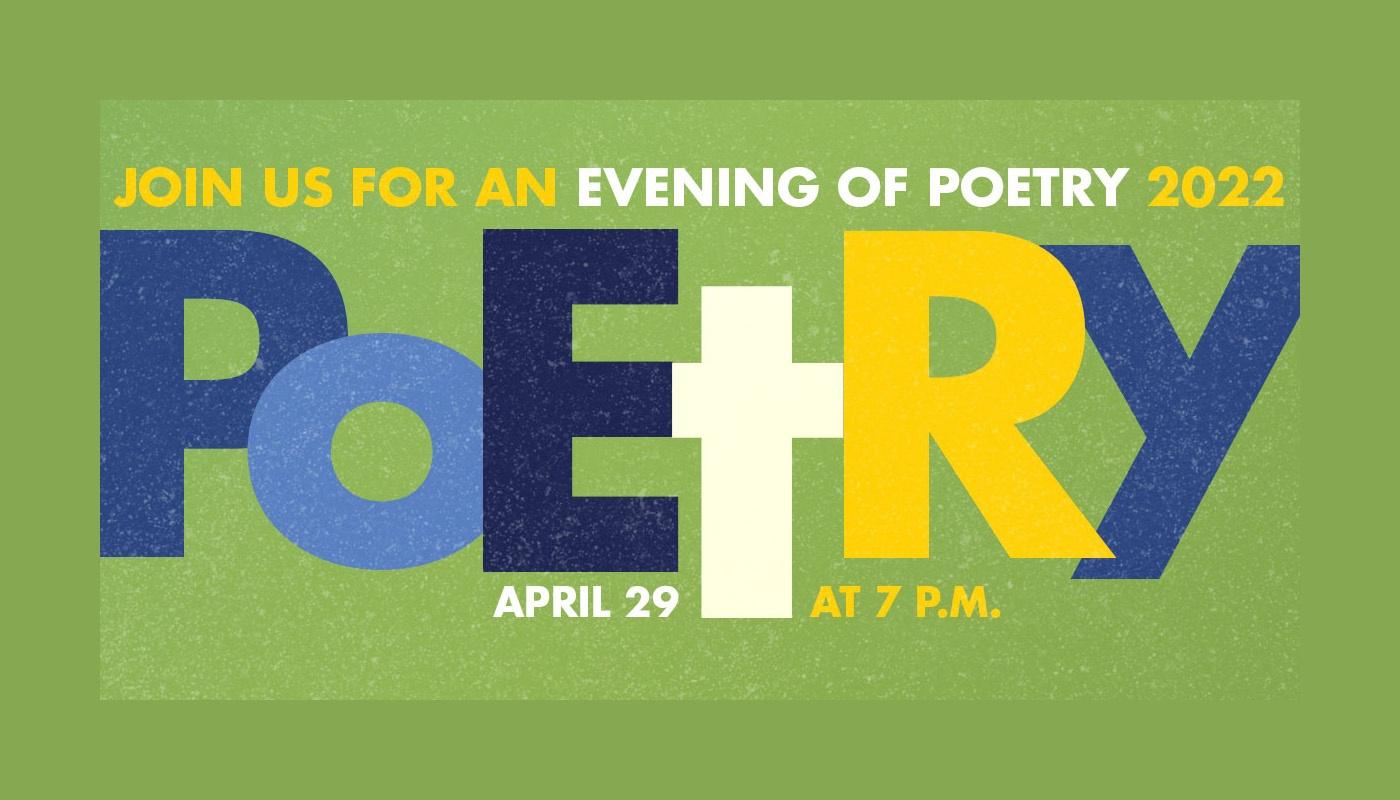 As we slide into another year of uncertainty around the pandemic and world events, one way to find firm ground and inspiration is through poetry. For the second to last day of National Poetry Month, Mitch Wertlieb hosts a virtual event with four beloved Vermont poets.

The event will feature readings by poets Kerrin McCadden, Reuben Jackson, Rajnii Eddins and Bianca Stone, as well as discussion of their work and what inspires them. What better way to relax and reflect on a Friday night? 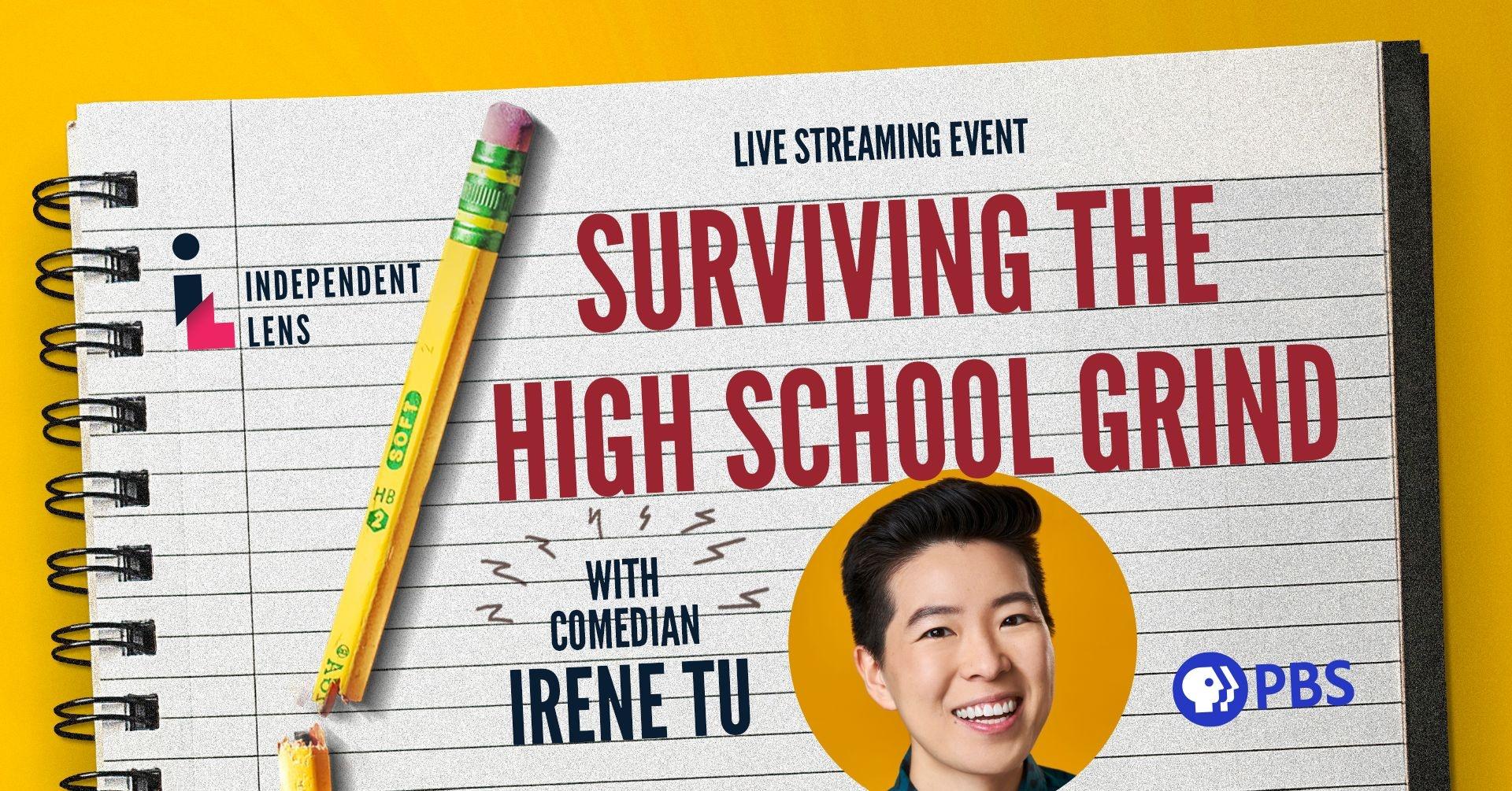 Live from San Francisco’s KQED, Independent Lens Vermont PBS bring you a rousing night, inspired by the new documentary Try Harder! about the academic pressure-cooker of SF’s Lowell High School and stressed-out seniors chasing the college dream. Comedian Irene Tu hosts an evening of live storytelling, film clips, and conversation with high school students about the high stakes of educational achievement and whether college is worth the grind.

See broadcast dates of the episode

ANTIQUES ROADSHOW will make its first visit to Vermont 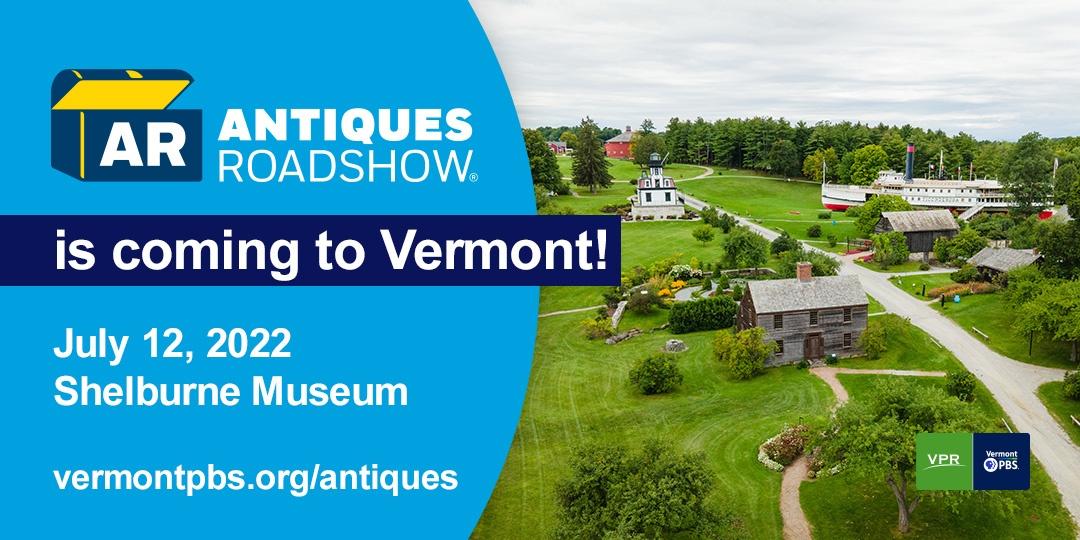 Time to rummage through your attic!

ANTIQUES ROADSHOW will make its first visit to Vermont on July 12 at Shelburne Museum for an all-day appraisal event as part of the series’ 27th production tour.

Guests will have the opportunity to bring two items for free verbal appraisal by experts from the country’s leading auction houses and independent dealers. 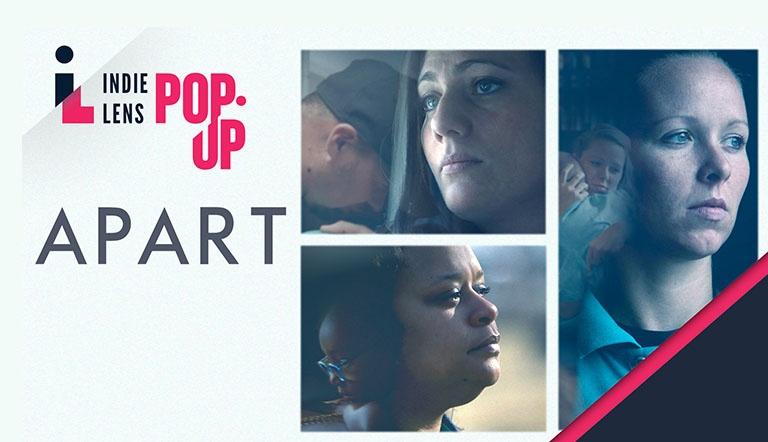 On Feb. 17, 2022 we hosted a preview an live chat. If you missed it, you can check out the documentary at www.pbs.org/independentlens/documentaries/apart

In a country leading the world in incarcerating women, meet three mothers fighting to rebuild their lives. Join us for a preview screening of Apart on Thursday, Feb. 17 at 7 p.m.

Since the beginning of the War on Drugs, the number of women in U.S. prisons has grown over 800 percent, and the majority of those women are mothers. In Apart, Academy Award-nominated filmmaker Jennifer Redfearn (Sun Come Up and Tocando La Luz) examines this staggering statistic through the lens of three mothers imprisoned in the Midwest for drug-related charges. Apart depicts their struggles with poverty, addiction and surging incarceration rates as these women strive to mend familial bonds after years of separation and reestablish their lives once released from prison.

Recorded Jan. 26, 2022 - Migrants go missing in rural Brooks County, Texas more than anywhere else in the U.S. For many families, community activist Eddie Canales is the last hope for finding loved ones.

Following a preview of the film Missing In Brooks County we hosted a conversation with the film's producer and editor, Jacob Bricca. Hosted by Eric Ford, Director of Content Partnership at VPR + Vermont PBS.

Missing In Brooks County is part of the Independent Lens series available to stream at: video.vermontpbs.org/show/independent-lens/.

Recorded Nov. 18 2021 - As part of One Small Step, VPR and StoryCorps have spent the last several months connecting residents with different views who might never talk otherwise for a simple, personal conversation.

We’ll pull back the curtain on this nationwide initiative during a free virtual event on Thursday, November 18. Vermont Edition's Mikaela Lefrak and Connor Cyrus will host an interactive dialogue and listening session with One Small Step participants, who will reflect on the experience of breaking out of their political bubble and putting aside stereotypes.

And we'll explore ways to bring these courageous conversations forward, with panelists from Braver Angels and Front Porch Forum - organizations that are encouraging Vermonters to build community and providing tools for them to do so.

Following a preview of the documentary Storm Lake, a look inside the Storm Lake Times, a Pulitzer-winning newspaper keeping local journalism alive; we hosted a live discussion about the film and the state of local journalism in Vermont. Host Mark Davis, Managing Editor for News at Vermont Public Radio, facilitated a conversation with:

Recorded live Oct. 14, 2021 - Following a screening of the NOVA film, The Cannabis Question, we hosted a conversation about the legalization of marijuana in Vermont with:

Recorded live on September 14, 2021 - In advance of the Ken Burns documentary, Muhammad Ali, we were joined by producer Sarah Burns and biographer Jonathan Eig for a fascinating conversation about the life of Muhammad Ali. Hosted Vermont Public Radio's Mitch Wertlieb.

Recorded live June 17, 2021 - Following a screening of Breaking Through, episode five in the Asian Americans film series from PBS, we hosted a live discussion with Asian Americans living in Vermont. 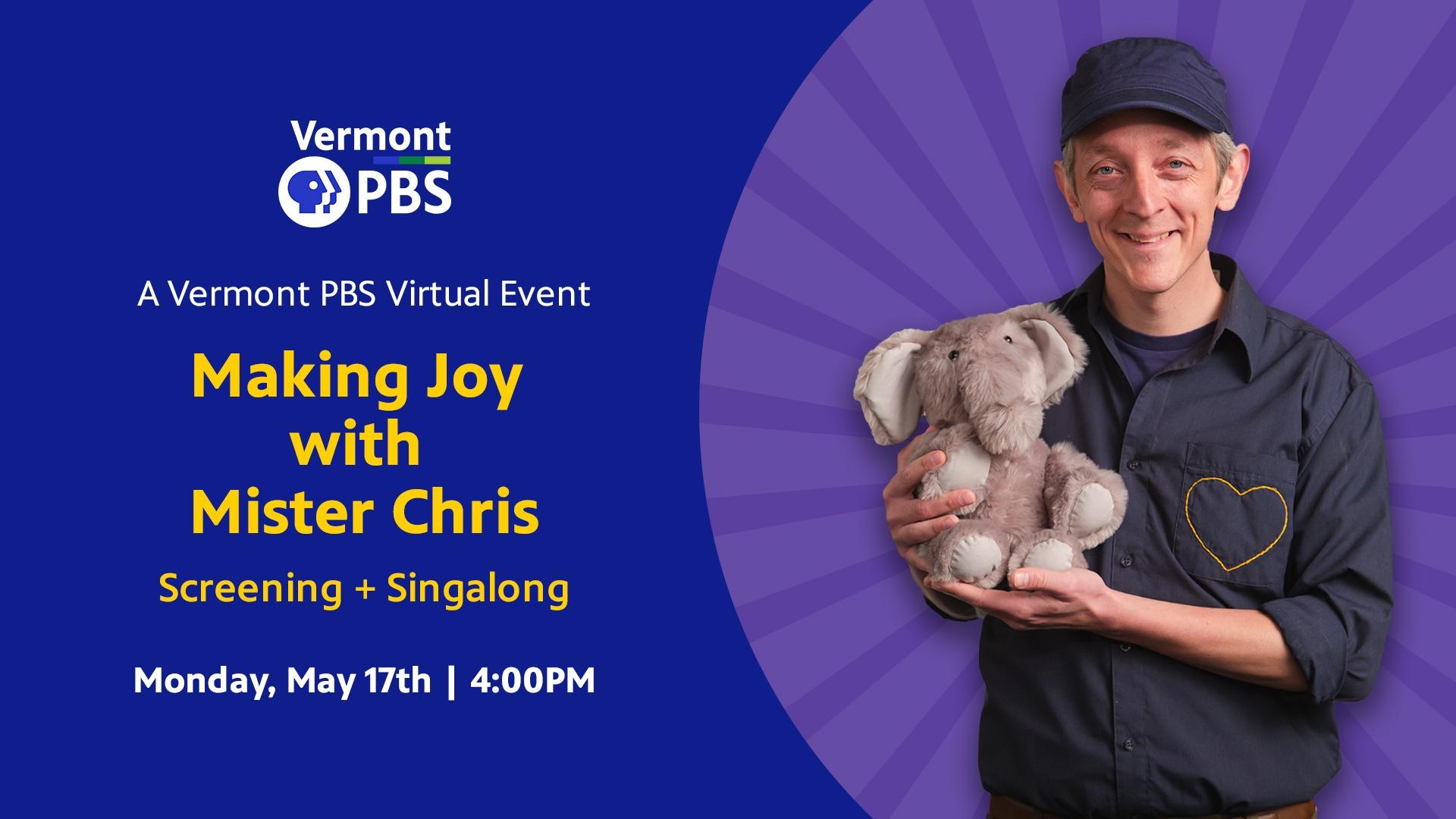 Recorded May 17, 2021 - Join us for a special family-friendly virtual event with Mister Chris! Get ready to sing, dance and see a new short video from Mister Chris and Friends. Bring your favorite song requests, questions, and ideas for a brand-new song to write with Mister Chris. This free event is open to everyone. 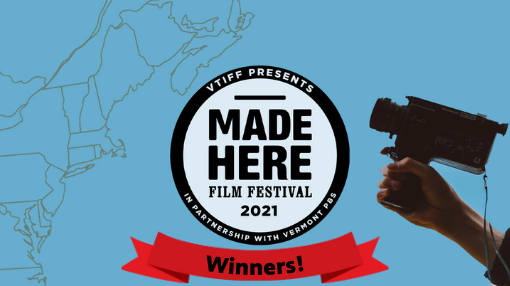 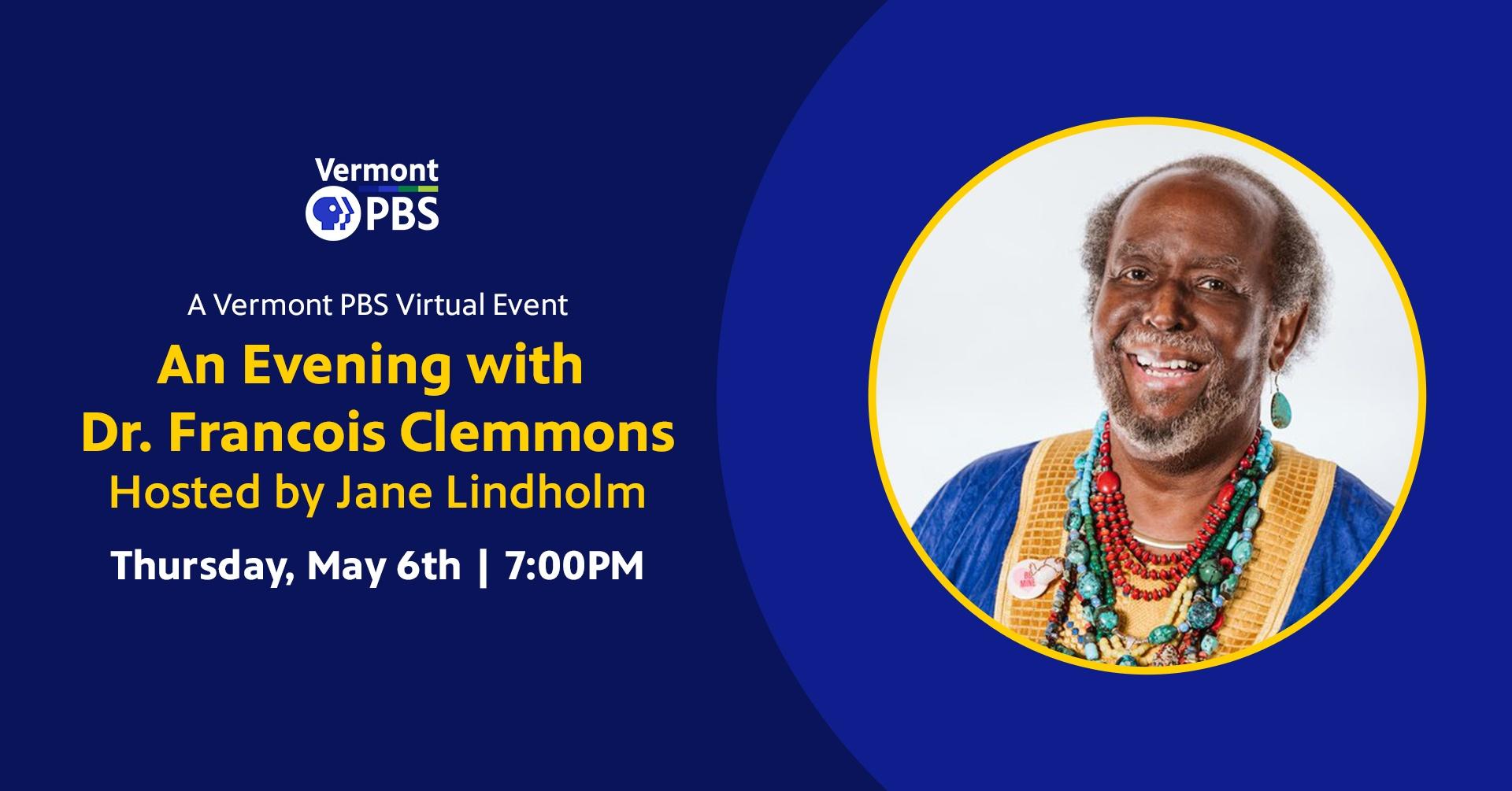 An Evening with Dr. Francois Clemmons

Recorded May 6, 2021 - He made history as Officer Clemmons on the award-winning PBS television series Mister Rogers’ Neighborhood. Herald as the first African American actor to have a recurring role on a U.S. television program, his many accomplishments make him a Renaissance man of the highest order. He is a Grammy Award-winning opera singer, founder of the Harlem Spiritual Ensemble, emeritus artist in residence at Middlebury College, actor, composer, arranger, playwright, activist, mentor—and with the publication of Officer Clemmons: A Memoir, he now adds author to the list. Join host Jane Lindholm for an in-depth interview with Dr. Clemmons, who will read an excerpt from his memoir, answer audience questions, and conduct a virtual book signing. 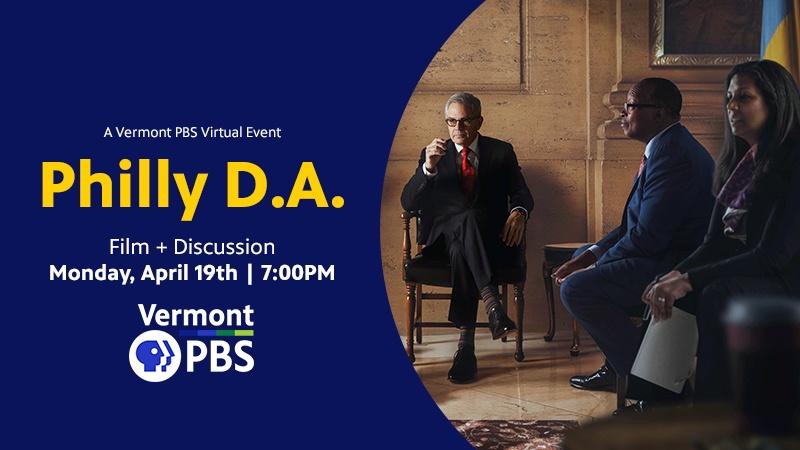 Recorded April 19, 2021 - Philly D.A. is a groundbreaking documentary series embedded inside the long shot election and tumultuous first term of Larry Krasner, Philadelphia's unapologetic District Attorney, and his experiment to upend the criminal justice system from the inside out. 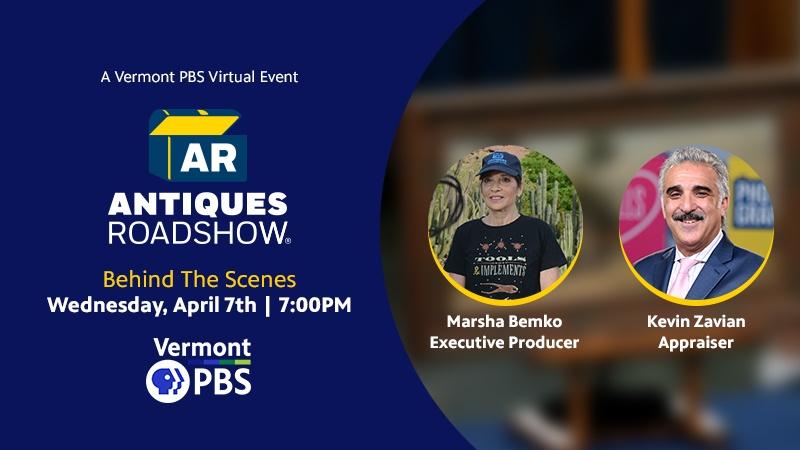 Antiques Roadshow Behind The Scenes

Recorded live April 7, 2021 - Find out what makes Antiques Roadshow PBS’s most-watched ongoing series. Join us and meet Marsha Bemko, Executive Producer of the 18-time Emmy® Award-nominated program, and Kevin Zavian, a third-generation jeweler and Roadshow appraiser since 2000. You’ll also get a sneak preview of special new episodes airing this spring, and there will be plenty of time for Marsha and Kevin to take your questions! Hosted by Thomas Denenberg, Director of the Shelburne Museum. 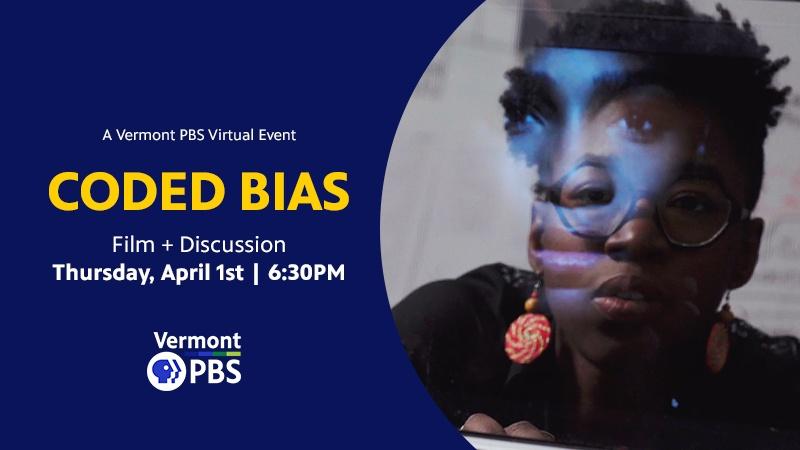 Recorded April 1, 2021 - When MIT Media Lab researcher Joy Buolamwini discovers that many facial recognition technologies fail more often on darker-skinned faces or the faces of women than others, she delves into an investigation of widespread bias in the technology that shapes our lives.

Following the film, VPR’s Henry Epp will take your questions for Joseph Near, assistant professor of computer science at the University of Vermont and Falko Schilling, Advocacy Director with ACLU of Vermont. 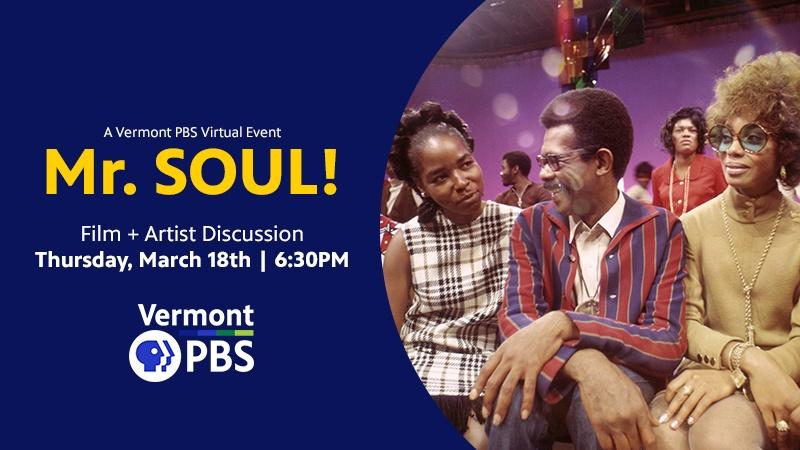 Recorded live Mar. 18, 2021 - Before Oprah and Arsenio, there was Mr. SOUL! From 1968 to 1973, the public television variety show SOUL! offered an unfiltered, uncompromising celebration of Black literature, poetry, music, and politics, capturing a critical moment in culture whose impact continues to resonate today. Following the film, join us for a live chat with these Vermont artists: 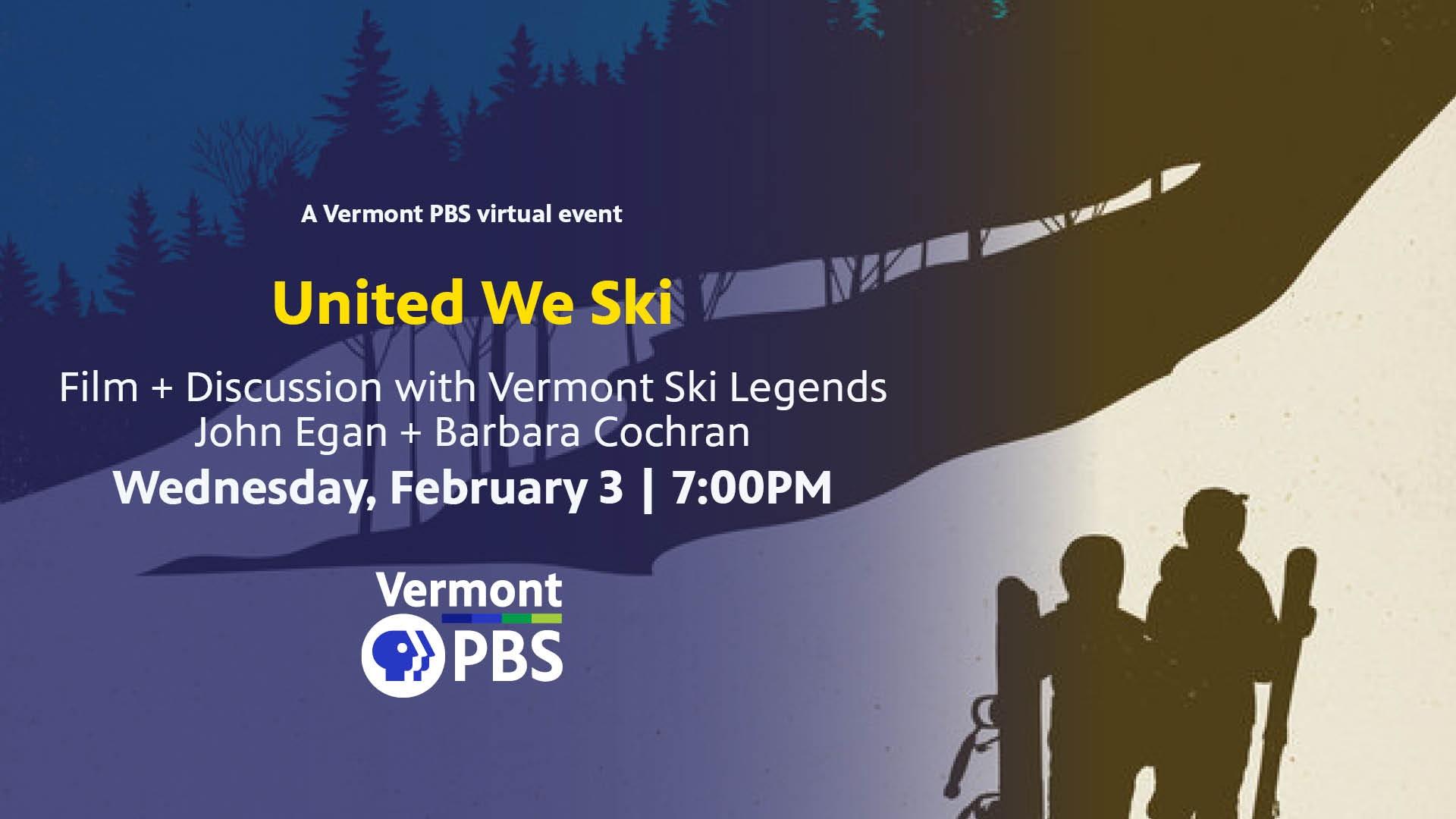 Recorded live February 3, 2021 - United We Ski examines the importance of small ski areas to the sport of skiing and New England Life. The film looks at the rise and decline of Vermont’s small ski areas and tells the story of three surviving: Hard'ack, Cochran's Ski Area, and Northeast Slopes. Produced by Elliot and Tyler Wilkinson-Ray of T-Bar Films. 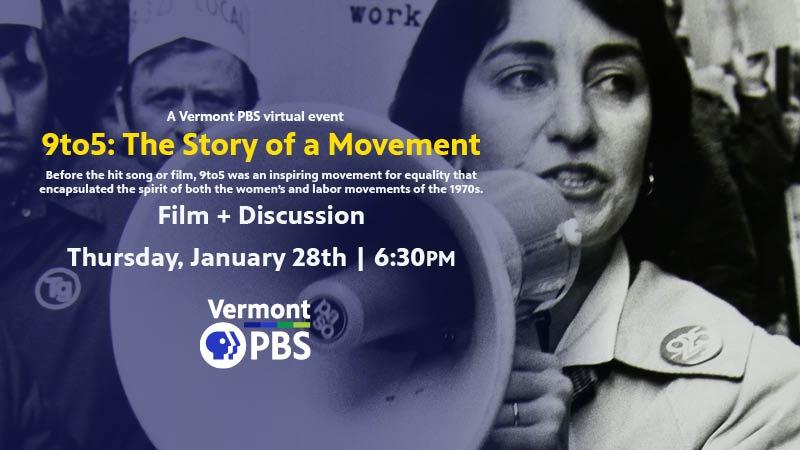 9to5: The Story of a Movement

Recorded live January 28, 2021 - Before the hit song or film, 9to5 was an inspiring movement for equality that encapsulated the spirit of both the women’s and labor movements of the 1970s. Join us for a special sneak preview of this new film from Independent Lens followed by a conversation with a co-founder of 9to5 Boston. Share your questions and ideas to continue the fight for equal rights for women and equality for all. 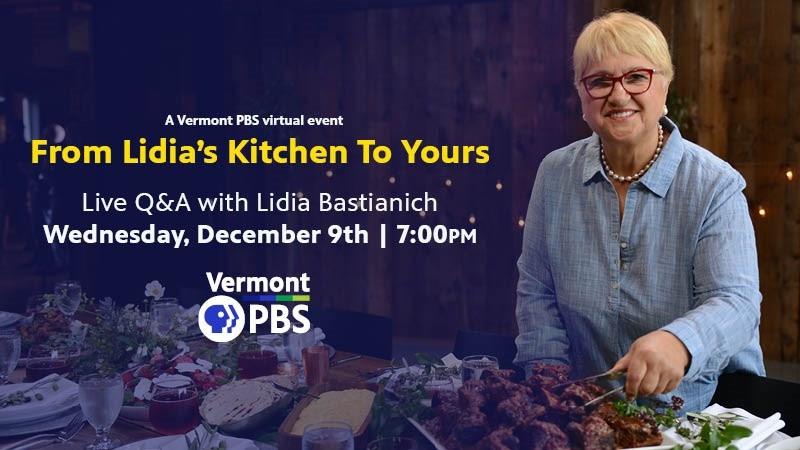 Recorded Live on December 9, 2020: Vermont PBS hosted a live Q&A with chef, restaurateur, author and television personality Lidia Bastianich. We discussed holiday cooking and traditions, favorite recipes, her latest cookbook, Felida - recipes from her flagship restaurant in New York City - and took questions from the audience. Hosted by Melissa Pasanen, a food writer for Seven Days and an award-winning cookbook author and journalist who has covered food and agriculture in Vermont for 20 years. Sponsored by: Healthy Living Market & Café Stowe Kitchen Bath & Linens 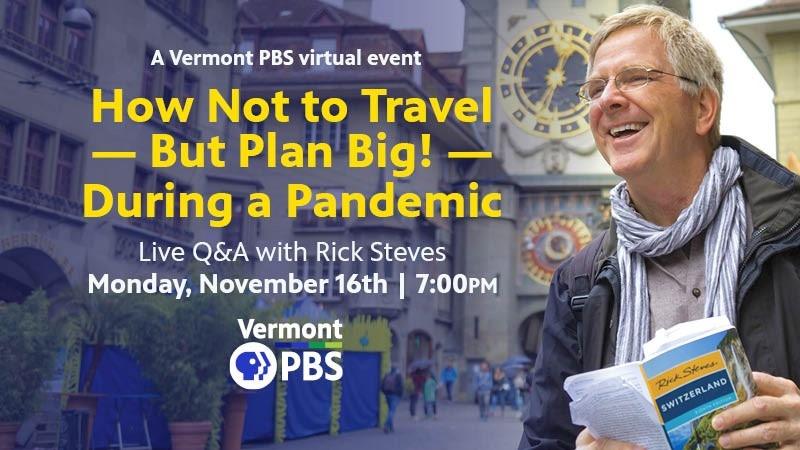 How Not to Travel - But Plan Big! - During a Pandemic with Rick Steves

Recorded November 16, 2020 - Get inspired from your couch—and plan your next big adventure—in this live Q&A with travel expert Rick Steves.

Rick will share tips on how to travel without leaving your home and take your questions about planning future travel. 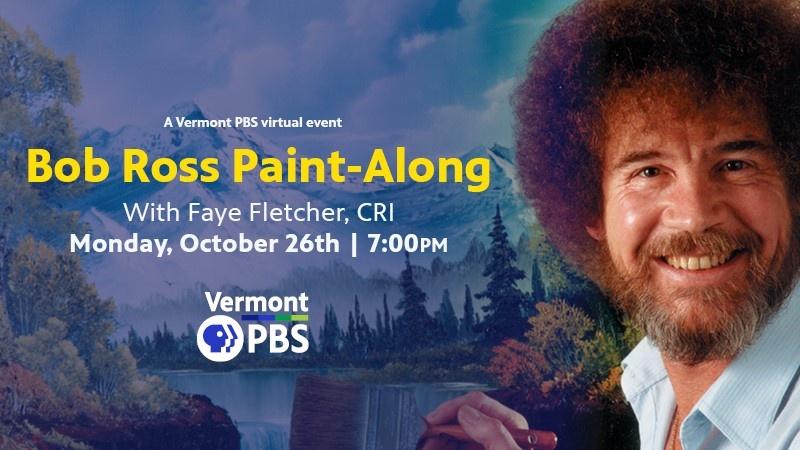 Recorded Oct. 26, 2020 - Vermont PBS and BobRoss.com invite you to a joyful evening learning to paint in the style of the one and only Bob Ross with Faye Fletcher, CRI. Faye has been sharing the Joy of Painting since 2002, when she followed her dream and became a Certified Ross Instructor. Since then, she's had over 5,000 students in her classes. That's a lot of happy trees! RSVP for this FREE event, gather your supplies, and get ready to paint a majestic mountain lake. 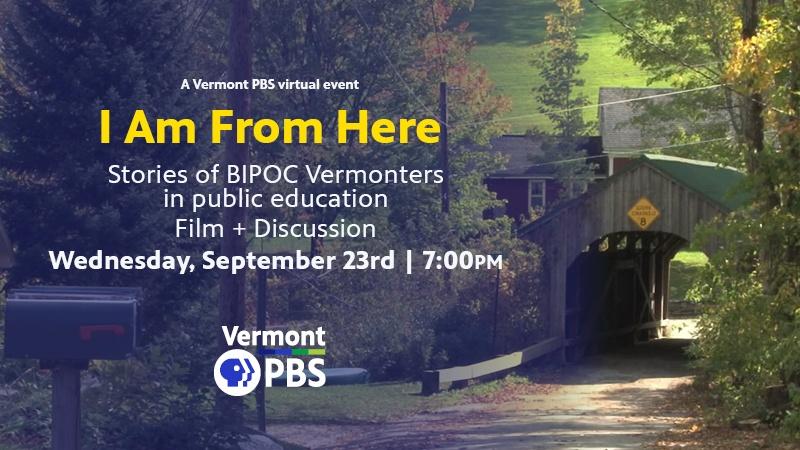 I Am From Here

Recorded Sep.23, 2020 - I Am From Here features BIPOC educators and students sharing their personal stories of living in and going to school in Vermont. It was produced by Bess O'Brien and commissioned by the Vermont NEA.

Following the film, filmmaker Bess O’Brien will chat with interviewees from the film to find out what changes have occurred in Vermont since the film was produced in 2018. We welcome you to join the conversation as well.

Recorded live August 12, 2020 - A FREE sneak preview of Women's Stories: Short Film Showcase, part of our Made Here series. We will share five short films and then you will have an opportunity to ask questions of the filmmakers. Our event will be hosted by Dr. Van Dora Williams, an award-winning producer and writer and Associate Professor of Communications and Creative Media at Champlain College. The films we will share are as follows:

The Vote: Sneak Preview and Discussion

Recorded July 1, 2020 - Women weren't given the vote, they took it. You're invited to a sneak preview of the new American Experience Film, The Vote. It chronicles the fight for the passage of the 19th amendment, giving women the right to vote. Hosted by: Elizabeth Hewitt | VTDigger. During the event we’ll speak with:

Recorded June 19, 2020 - Lucy Worsley travels across Britain and Europe visiting the incredible locations where Royal history was made. In beautiful palaces and castles and on dramatic battlefields she investigates how Royal history is a mixture of facts, exaggeration, manipulation and mythology.

After the preview Paul Deslandes, Department of History Chair at the University of Vermont, talks with Lucy about her role as Chief Curator at Historic Royal Palaces, her research in British history and we'll take your questions as well!